I have recently returned from an academic conference in Canberra with a new appreciation of how Tweeting at conferences can expand your participation in the event – both with other participants (both those who Tweet and those who don’t) and in your own understanding and appreciation of other papers. Tweeting focuses and distills your understanding – and yes, it can also distract and fragment your energy and concentration.

So – why do it, and if you do, how to get the best out of your conference Tweeting?

My involvement in The Affective Habitus Conference in Canberra from 19-21 June, 2014, included pre conference media and in conference live Tweeting. This was my first conference where I was both presenting and Tweeting, both as myself and also as postgraduate committee member for Aslec-Anz (the Association for the Study of Literature, Environment & Culture, Australia and New Zealand.

The Affective Habitus (New Environmental Histories of Botany, Zoology and Emotions) conference tackled issues of climate change from a humanities and science perspective. The papers were thought provoking, challenging, and asked us to consider among other things; plant subjectivity, depression as a shared creative endeavour, our connection with the ocean and the concept that the ice core remembers us from a time long before we humans even had a concept Antarctica existed.

Not surprisingly, the beautifully constructed papers and provocative topics lent themselves to Tweeting – broadcasting information live in neat soundbites of information.

Tweeting at conferences is a great way to get these ideas out. I was Tweeting under my own Twitter handle and also that of the conference organiser Aslec-ANZ – as was a colleague and several other conference participants. We all managed to Tweet slightly different versions of the same information, so that a talk became a multi facted version of itself, as if you are standing at a mutli panelled mirror and each version of the reflected imaged slightly changed.

While there are some obvious measures to take when Tweeting at a conference – everyone sticking to the same conference hashtag for a start (such as The Affective Habitus hastag #ecohab14), I was interested to see that Brian Croxall at the Chronicle of Higher Education suggesting that conference participants also provide their Twitter handle up front when they begin their presentation, so others can Tweet their talk effectively. That’s a great idea, as it makes attribution easier. Not everyone can be easy to find on Twitter!

Two conference participants in particular at Affective Habitus – the dynamic Eileen Joy – (@EileenAJoy) and equally media savvy Siobhan O’Sullivan – have a large social media following and well known, easily found Twitter handles. For the others I tried searching them out and when I couldn’t find them, I simply added their full names for attribution.

Croxall suggests that two rules to keep in mind both as the Tweeter and the Tweeted; for those presenting, expect to be tweeted and assume (or hope) you will be, and for the person Tweeting – do so professionally, respecting people wishes not to be photographed or their words broadcast if they make that clear. However, most people are delighted to have their ideas disseminated via social media. I personally always ask permission before I take someone’s photograph for Twitter  – except in  the case of a remote keynote when it is a case of dissemination of knowledge via electronic media (skype/video) anyway. 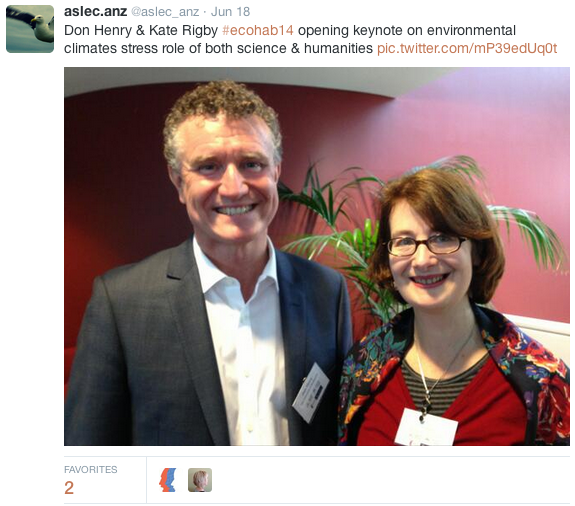 Then there is the vexed problem of tweeting at a conference social gathering, such as the conference dinner or drinks. Does one Tweet images and conversation? My feeling is that when it comes to photos, perhaps approach the keynotes with key people (especially if they are a little glam and dressed up) but do it early before you and they have had a drink to unwind, and respect the edict “no – not at this social event’. And as for Tweeting social talk – just don’t. My motto is be interesting, but not invasive. And besides, at the social gatherings, you are there to relax and network and get to know those in your field better, not to broadcast the gossip! It goes without saying, never Tweet and drink.

That gets us to an interesting point – if there are so many restrictions, and Tweeting can be so invasive for everyone, why tweet at all? There is a school of thought that says “Don’t Tweet. Pay attention to the conference presentations, or you are wasting your time.” A valid point, except when you are in charge of promoting the conference – and helping promote the message of the conference, as I was.

But I also discovered that Tweeting at conferences boosts the visibility of your own paper, and your own profile in your chosen subject area.

My paper was on Cli-Fi – or climate change inspired science fiction. Using the pace and narrative technique of science fiction – an ideas based genre – my goal is to entertain and inform taking the readers into deep ecological ideas and animal rights issues through a fast paced story line. I Tweeted something about this and discovered a rich vein of like minded followers under the #clifi tag.

Don’t lose sight of the fact that conferences are about communicating ideas, and in these days of the Internet, we need to think beyond the walls of the conference venue and communicate globally – a hasthtag (such as #ecohab14) can take your message and research across countries, continents, hemispheres. I may have been sitting in the Humanities Research Centre at ANU, stealthily acquiring a cold of epic proportions along with plenty of ideas for my next paper and next book, but my Tweets broadcast the conference well beyond the graceful streets, brilliant but cold blue skies of a Canberra morning out to the world. From somewhere so remote, in effect, as the pinprick on a continent in the southern hemisphere, we connect. One Tweet is a ripple in the pond of information, forever spreading. 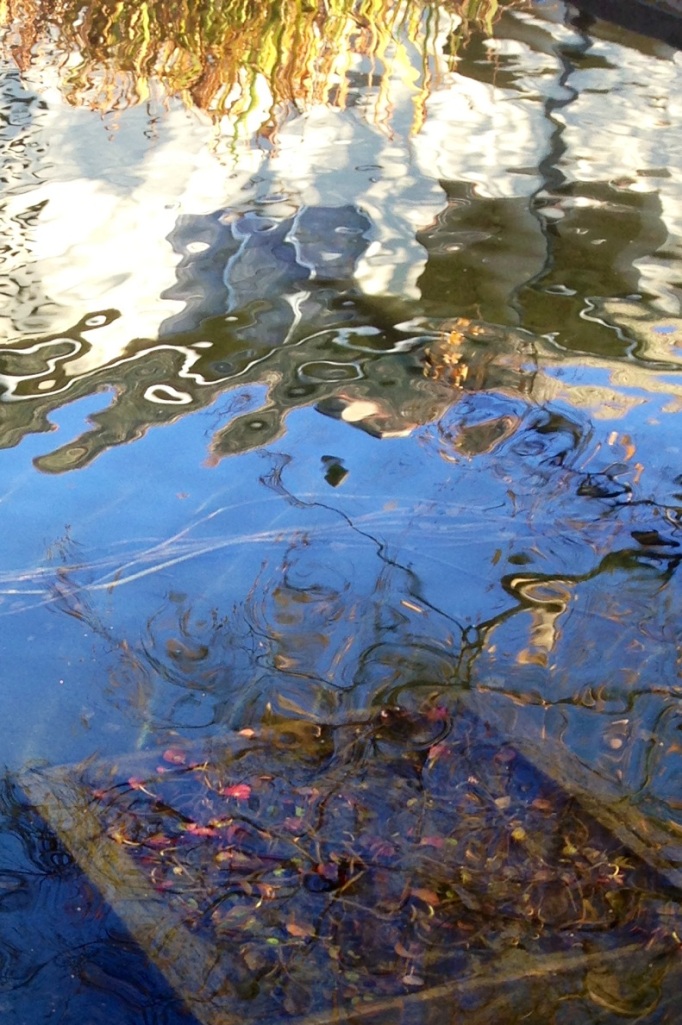 But – that said – there is a downside to Tweeting at the conference – for the Tweeter – as you do not get to give the papers your undivided attention, because you are constantly on the look out for ‘sound bites’. Now, some presenters are adept in the art of the sound bite, encapsulating their key message in a pithy quote early on. Others speak in realms of poetic sound bites, their pens deftly carrying verbal hooks that have lulled audiences for years into sailing with them on their thoughts. Then – there are those for whom the every act of public speaking is a painful event, and the act of writing for the public is lost in the assumed worth of their words. This is perhaps when it is time to abandon the notion of Tweeting that paper at all, unless it is of vital importance and you can curate their research in 140 characters for them.

Like writing notes, Tweeting allows you synthesise important points of someone’s paper, and also become a short hand for your own notes looking back at conference proceedings. I use my Tweeting and Retweeting as a way of curating information for myself – my rule is if I want to read it again and find it valuable, then I’ll Tweet it. It is an archive of curated media in a seam of information that I constantly refer back to.

Dr Katie Mack – @AstroKatie – is a researcher at the University of Melbourne’s School of Physics who spreads her science message via social media (she has a huge following! Check her out). In an article in the June 2014 university magazine “Unlocking the secret of tweet success” AstroKatie says “The number one question people ask me about using Twitter as a scientist is, “How much time does it take?” – her response – Twitter is an ongoing conversation you dip in and out of when you have a spare moment.

I agree. By live Tweeting, I am capturing my note taking and refining it to succinct points, and also pushing that into the Twittersphere with other interpretations of that event – I imagine this as a Hydra, with entangled threads of information weaving their way into cyberspace, but all connected to a single entity – the conference, the speaker. It’s an ongoing conversation where some points may be taken up by others, and some may not. It’s my interpretation, my voice in the conversation, about what is going on.

I certainly didn’t spend all my time Tweeting at the conference – but I did spend a lot of time listening for soundbites. Fond memories of my days as a journalist. However, those days have been taken over my my life in academia, and that’s a world where one goes deeper into the topic. One thing I do know is that Tweeting, like any communication, is done for an audience. Those I had in mind at the Affective Habitus conference were those who were interested in the conversation about the environment, ecocriticism, and science and the humanities. 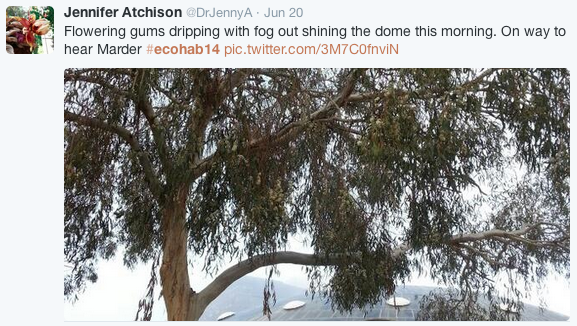 I also found it fascinating to connect with others while live tweeting – who out there was also interested in what the conference topic was? In short, conference Tweeting is about networking on a global scale and being part of a bigger conversation.

Status - graduated with PhDDecember 18th, 2013
Musings on the journey there - and beyond