I am pleased to let you know that the e-catalogue for my 2018 exhibition at RMIT Gallery is now ready to view online. My Monster: The Human-Animal Hybrid, designed by Karen Scott Book Design, can be accessed here:

My Monster: The Human Animal Hybrid explores our enduring fascination with the merging of the human and animal, and coincides with the 200th anniversary year of the publication of Mary Shelley’s Frankenstein.

I curated the exhibition at RMIT Gallery from 29 June – 18 August 2018, based on my widely published PhD research. While the research wasn’t intended to end up as a visual exhibition, it became a logical outcome of my visual arts background.

The exhibition playfully and provocatively examined the role the human animal hybrid has played in the human imagination.

What visual artists can do so powerfully is simultaneously take the viewer into the conflicted and internal world of the hybrid, while at the same time giving a face and identity to the hybrid within the physical but imaginary world.

A single artwork can literally replace thousands of words of written text or pages of academic references.

The 35 Australian and international artists represented in the exhibition use the hybrid as a varied and powerful metaphor, exploring our complex relationship with maternity and domesticity; segregation and alienation; fractured relationships with the natural environment and other animals, as well as struggles with our public and private personas.

The exhibition examines the artistic representation of the human animal hybrid from mythology to movies; taxidermy to biotechnology; painting and photography to multi-sensory immersive sound installations.

The exhibition coincides with the 200-year anniversary of Mary Shelley’s Frankenstein, which gave rise to the portrayal of the mad scientist and outcast hybrid made from human and animal parts.

The desire to merge human and animal into one creature has fascinated artists for 40,000 years, with the hybrid constantly updated and reinvented from century-to-century – from Greek classical myths and European folktales through to fairy tales, stories of werewolves and vampires and popular culture.

Take the virtual tour: https://rmitgallery.com/category/digital-resources/ and scroll down to My Monster virtual tour – press on the icon 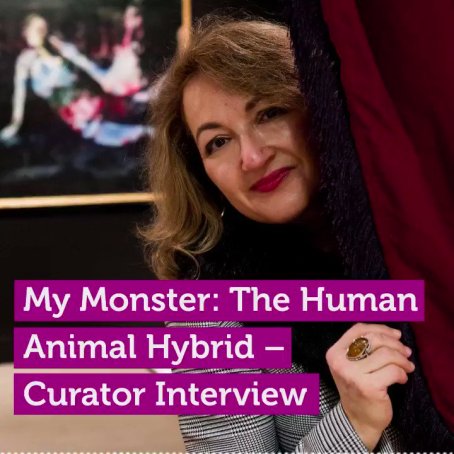 Dr Evelyn Tsitas talks to RMIT Communications Specialist Aeden Ratcliffe about the origins of the My Monster exhibition, the 200th anniversary Frankenstein, and society’s fascination with the human animal hybrid – part of RMIT Gallery’s exhibition My Monster: The Human-Animal Hybrid

and Artist Talk Podcast with Kate Clark and Julia deVille

New York-based sculptor Kate Clark’s work synthesizes human faces with the bodies of animals, while Melbourne jeweller and taxidermist Julia deVille work is informed by a fascination with the acceptance of death expressed in Memento Mori jewellery of the 15th to 18th centuries and Victorian Mourning jewellery.

Both artists showcased their work in the RMIT Gallery exhibition My Monster: The Human-Animal Hybrid (29 June – 18 August 2019).

Clark says “The fusion of human and animal that I create presents a fiction suggesting that our human state is fully realized when we acknowledge both our current programming and our natural instincts. I emphasize the characteristics that separate us within the animal kingdom, and, importantly, the ones that unite us.”

She stitches the surreal creatures together like any taxidermist, but has a few quirks that make the art her own: she only works with imperfect, salvaged pelts that would likely be wasted, and patches up their holes—which often occur on their heads—with human faces made of clay.

Similarly, deVille employs taxidermy as a celebration of life and sees it as the preservation of something beautiful, only practising ethical taxidermy.