A few weeks ago, I submitted my doctorate in creative writing. One of the requirements is showing evidence of original contribution to knowledge. I am analysing the human-animal hybrid in science fiction – and writing a novel about it. My work explores the abuse and exploitation of the Other – those who society deems should be banished or marginalised.

I have been asked by those outside the academy what relevance my research has when I am not even investigating anything “real”. After all, human-animal hybrids don’t exist except in fantasy, fiction and mythology. And then Australian media personality and President of the Collingwood Football Club, Eddie McGuire, opens his mouth, linking Australian Rules Footballer – the dual Brownlow medallist Adam Goodes – with the new musical King Kong, only five days after a 13-year-old girl called the indigenous player an ape at a match at the MCG.

Suddenly, I find my work is indeed relevant beyond the page, beyond the doctoral submission. My research material becomes shockingly, sadly pertinent. Maureen Duffy’s 1981 novel GorSaga, about a scientist who impregnates a gorilla with his own semen to create a hybrid, follows Gor Bardfield through his troubled life where no one knows his species hybridity but they do know he is different. And when someone is different, a human trait is to brand them as Other, and the ultimate Other is – animal:

Media commentators have gathered in force to support or decry McGuire’s words (and subsequent apology) in the past week. Columnist Andrew Bolt devoted a page to supporting McGuire: “…I am ashamed I helped a vile mob to punish McGuire more than is remotely fair, pushing him to tears.” (Herald Sun, June 3, 2013) The headline: “Sorry Eddie” neatly turning the story away from the victim of the racial attack. In his article, Bolt beseeches Goodes (and anyone else unfortunate enough to be the brunt of a racial abuse) to turn the other cheek.

However, McGuire’s comments cannot be so easily dismissed. It matters that he used the words he did. It matters how we respond to them as a society. In her 2011 Pilgrim Award acceptance speech from the Science Fiction Research Association, feminist theorist Donna Haraway argues:

How we as a country debate the Eddie McGuire fallout matters a great deal. For his were indeed savage remarks. The exhibition Human Zoos at the Musée du Quai Branly in Paris last year highlighted the brutal meaning behind likening people to apes. Others – people not like us – were viewed as those on the margins of humanity, existing on the borderline of the animal world, hence “wild” or “savage” beings. Human zoos displayed those deemed different or other as savages, objects of prurient curiosity under the guise of science. The exhibition of imported Others was a profitable industry. A photo-card from Austria in 1890 depicts an “Aborigine Troupe” on display. 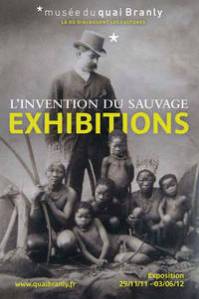 Indigenous Australians were exhibited in public theatres and scientific laboratories across the United States and Europe from 1884. Only three were still alive when they were displayed in France, represented in photographs that were intended to present the Other as inferior but civilisable. At the end of the 18th century, Dutch naturalist Petrus Camper’s anatomical drawings were used to lend weight to a theory of racial hierarchies based on aesthetics. At one end was the ideal (white) person, at the other (non-white) end, according to Camper, were those who resembled monkeys.

In 2008, former international footballer Lilian Thuram, the most capped player in the French national team, put his name and profile behind the Liliam Thuram Foundation, which educates against racism. On the website, the stark and simple message is one that Eddie McGuire might do well to read – along with his supporters. “We are not born racist, we become racist … Racism is an intellectual and – above all political – construct.”

In his preface to the Human Zoos catalogue, Thuram wrote that “even today, for many communities, the best way of defining themselves is to oppose themselves to others: ‘They are like that and we are not’. Are we not capable of enjoying self-esteem without denigrating the Other?”

Perhaps it is telling that McGuire’s comment was not a well thought-out one, but one that by his own admission was “a slip of the tongue” (AM with Tony Eastley May 30). According to French philosopher Gaston Bachelard “thought and experience are not the only things that sanction human values. The values that belong to daydreaming mark humanity in its depths.” If this is the case, then McGuire’s subconscious remark reveals we have a long way to go before we stop thinking of “us” and “them”.

Australia’s own Thuram, football great and The Long Walk founder Michael Long, has suffered racist remarks on the field. He told Herald Sun chief football writer Mark Robinson that the only way forward is with education: “By saying ‘ape’, where did that girl get it from? It came from someone else, it had been passed down in their history.” (Herald Sun, June 1, 2013)

Melbourne is home to a sports museum. We have the venerated hide of the celebrated Australian racehorse Phar Lap on display at the Melbourne Museum. Perhaps we should take a leaf from Europe and accept that as a nation, the time has come to reflect deeply on our past without the fear of being branded a “screeching New Racist” (Andrew Bolt, Herald Sun, June 3).

If a seasoned media personality such as Eddie McGuire can make such a devastating and casually reckless remark about a fellow human, perhaps the rich, powerful and influential of our land could get behind a collective push to establish a museum that specifically celebrates diversity and is responsible for holding as confronting and challenging exhibitions about our own country’s past as the one on Human Zoos.

Never underestimate the power of cultural diplomacy – or the impact of sport in helping shape public opinion. This is not simply a story about Eddie McGuire or about how sorry he feels, or about whether or not Australia is a racist country. As Thuram explains, he has encountered racism wherever he has been. It is foolish to think that Australia is immune.

* This blog was first published at RMIT Blog Central